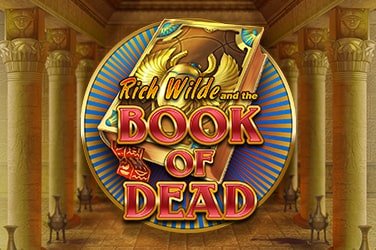 Rich Wilde and the Book of Dead is an online favourite with slots players who enjoy their games with a taste of adventure. Featuring immersive 3D graphics and a fantastic storyline, Book of Dead is much more than your usual slot game. The graphics are expertly rendered and bright but not to such a degree that the mystique of the setting is compromised. The symbols you’re playing for are all designed with an Ancient Egyptian theme in mind, while other symbols, such as pharaohs and the Book of Dead itself all bring life to the story.

Book of Dead is a slot game with five reels and ten paylines, though these are not fixed paylines, so you can choose to play with more or fewer paylines if you want. Of course, more paylines often means more winning opportunities. Players win by making winning combinations from a range of symbols including 10, J, Q, K, and A, as well as Rich Wilde himself, and three Egyptian Gods. The higher value symbols, including Rich Wilde, will score higher value prizes.

Big prizes can be won using the game’s wild and scatter symbols, both of which are represented by the Book of Dead. The scatter symbol can lead to some big wins as it also acts as a multiplier and opens up other paylines (even if you’re only playing with one). It’s important to remember that this is a high volatility slot game, so it’s very normal to spend a long time making nothing, and then win big on a bonus round.

Players looking to make a tidy sum playing Book of Dead should note a return to player of 96.2%, which is about average for this kind of slot game. Players can bet with as little as $/€/£0.01 and as much as $/€/£100, with chances to win back up to 1000x the original bet, meaning that high rollers could win even $/€/£100,000 on a single spin if they stake high. Due to the wide range of bets accepted by the game, Book of Dead is a great choice for all levels of players.

As a high volatility game, Book of Dead’s win rates will always favour players willing to spend a little extra, as well as those willing to play the long game and wait for a big payout. However, with a minimum bet of just 1p, it’s also great fun for casual players who simply enjoy Book of Dead’s stunning graphics and immersive gameplay.