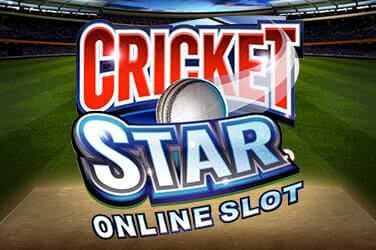 There are plenty of sports-themed slots games in the extensive roster of slots titles available at Las Vegas Casino and one of the most distinctive is this unusual cricket-themed title, produced by Microgaming, one of the legendary developers of the online gaming world. Microgaming have been around since the very beginning of the online slots world and their name is usually a stamp of quality.

At first glance, Cricket Star slot game appears to be a relatively conventional slots title, with five reels and three rows forming the layout. But appearances can be deceptive! The slot game features an impressive 243 paylines, which makes for a much more player-friendly gaming experience.

In Cricket Star Slot Game In terms of visuals, the cricket theme is maintained throughout. The backdrop for the reels in this slot game is an enormous cricket stadium packed with fans, while the symbols on the reels are icons representing some of the most famous cricketers in the world, along with an umpire, a number of fans and some icons depicting slot players celebrating. There is also a pleasing cricket-themed soundtrack to add to the atmosphere.

With an RTP of 96%, this is one of the more slot player-friendly slot games you will come across in the modern slots gaming world and the basic gameplay is entertaining. As well as the standard icons mentioned above, there is a Cricket Star slot game symbol that serves as the Wild and appears stacked on reels three through five, while a cricket ball represents the Scatter and activates the main bonus.

Cricket Star Slot Game there’s a pleasing array of bonuses, including the popular Rolling Reels feature. When you land a winning combination on the reels, the symbols involved disappear and are replaced by more symbols, which drop down into place, making it possible for slot players to pile up ever bigger wins.

The Wild Wickets feature is also appealing. In this bonus, three wickets land at the top of the middle reels and a cricket ball is then bowled towards the wickets. When the ball hits a wicket, the whole reel is turned Wild and you can land a guaranteed win.

In Cricket Star Slot Game we were also pleased to see a handy Free Spins feature. If a slot player lands three, four or five cricket ball Scatter symbols at any place on the reels, the reward is 15, 20 or 25 Free Spins, and as an extra bonus, the Rolling Reels feature is also activated during these Free Spins and every consecutive win that is landed will boost the multiplier involved, all the way up to a maximum of x10.

Cricket is popular all over the world and fans of the game will appreciate some of the nuances involved in this entertaining mix of slots action and cricket fun. But even non-cricket fans will enjoy the fast-paced gameplay and the slot player-friendly collection of bonuses and features that help to make the game more enjoyable. In Cricket Star Slot GameThe Free Spins are relatively rare rewards, but the Rolling Reels feature is a definite plus and lifts this game to the next level.

Play it at Las Vegas Casino, and enjoy the ultimate online casino experience.