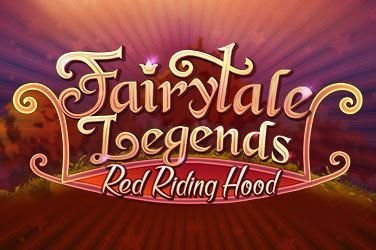 Little Red Riding Hood is a popular fairy tale that is known throughout the world, but those playing at Las Vegas Casino can play it in slot form with NetEnt’s Fairytale Legends Red Riding Hood.

Players will be able to embark on an adventure with this online casino title as they try to win some of the biggest prizes that the online video casino game has to offer via a number of bonus features that NetEnt have managed to pack into this slot.

It is no surprise that red is the colour theme of this online slot, although the dark red that takes over the game’s background is incredibly vibrant and provides a warm feeling when the reels are spun. This background is visible throughout the whole game as the playing grid is transparent. There are a number of cool animations in the Fairytale Legends game, including one which will see Red Riding Hood appear to be walking on the spot as the reels are spun.

The online video casino game’s icons have also been impressively designed visually. There is plenty of gold colouring used, with many of the icons appearing to have been handed that particular bit of attention.

This video slot follows a rather traditional playing grid formation, as it features 5 reels and 3 rows. There are a total of 20 paylines available for Fairytale Legends Red Riding Hood players to try and form winning sequences of 3 or more symbols. The game paylines are fixed and can not be altered, although other features are able to be customised via the casino game panel that has been provided at the bottom of the game screen.

NetEnt like to provide players of their casino titles with bonus features, therefore those at Las Vegas Casino who decide to play this Fairytale Legends Red Riding Hood slot game will be pleased to see that continue with this title.

There are 3 random ‘fairy’ features in the base game that can be triggered on any spin that does not feature a scatter. The first is the ‘Fairy Magic Spin’, which will transform an entire reel into one symbol that will increase the chances of landing a 4 or 5-symbol winning combination. ‘Fairy Surprise’ will only be activated on a losing spin and it will randomly choose one icon to transform all of the lowest reward icons into the same symbol. ‘Fairy Wild Spin’ will see sticky wilds come into play as 3 or 4 will land on the middle reels.

There are also 3 bonus features in Fairytale Legends Red Riding Hood slot that can be triggered by the game scatter icon – the treasure chest. Players can either receive an ‘Instant Win’ of 15x the stake, a ‘Free Spins’ round that provides 10 free spins with sticky wild re-spins, and a ‘Beware the Wolf’ bonus. Red Riding Hood will go down a pathway to try and reach Grandma’s cottage and there is the chance to pick up a number of coins and multipliers on the way.

A return to player (RTP) rate of 96.33% is very appealing for this Fairytale Legends Red Riding Hood online video slot as players can expect a return on the real money they use to place a bet. Wagers can be placed from as low as €/£/$0.20, but as high as €/£/$200 on each spin that they make in this low volatility online game.

With some top graphics, animations and bonus features, Las Vegas Casino slots players should look to play this NetEnt Fairytale Legends Red Riding Hood slot as soon as possible. This classic fairytale has been provided justice with this game and players can expect to have plenty of enjoyable moments playing it.