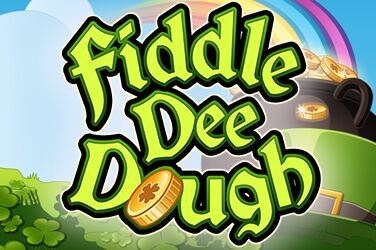 Eyecon have taken upon themselves to provide players with an Irish-inspired slot game with their Fiddle Dee Dough slot game that Las Vegas Casino users can look to enjoy.

Players are transported to a world that is stereotypically Irish, however if they have the “luck of the Irish” on their side, then there is no reason as to what they could be in the dough, as this slot game title suggests they will be.

What makes this Fiddle Dee Dough slot game so stereotypically Irish is the graphics and visuals that have been used by Eyecon. The game developer have managed to create a number of simple, but effective backgrounds and backdrops for their games and this Fiddle slot game is no different to any of their other popular titles. The background features a blue sky that is over a green field that sees a rainbow coming out of a pot of gold coins. If that were not enough, the addition of a Leprechaun’s top hat will have only further highlighted the Irish themes they have gone for.

The symbols included on this slot game also represent the Irish theme heavily, with a number of them all featuring things such as Leprechauns, beers, harps, gold coins, top hats and horseshoes.

Eyecon have made thisFiddle Dee Dough game incredibly easy to play, with players seeing all the action appear on a playing grid that consists of just 3 reels and 3 rows. This does mean that there are only 9 paylines available to form winning combinations – which are adjustable as well – however it makes life a little easier. There is a couple of handy features to the right of the screen that can help further enhance the gameplay experience, such as ‘Autoplay’ and the bet lines and values.

Despite being rather basic and simplistic in regards to the gameplay – which is not necessarily a bad thing – this Fiddle Dee Dough slot game has a number of bonus features built-in that can make it an incredibly enjoyable game to play.

The first comes in the form of the Fiddle Dee Dough game’s logo as this is the slot game’s wild. Landing this icon anywhere on the playing grid will see it substitute for all regular paytable icons and try and form a winning combination where possible.

The leprechaun, who happens to be smiling under his green top hat, is the Fiddle Dee Dough game’s scatter and is key to activating the ‘Free Spins’ round. Landing 3 of these happy fellas will trigger 8 free spins and the rewards won at the end of the bonus will be tripled.

Landing 3 of the pots of gold coins will also take players to another bonus game. Here, players will have 3 picks to make to try and find the biggest prizes that are hidden. The largest reward here is 111x the bet.

Fiddle Dee Dough slot game can be played with wagers from as low as €/£/$0.01 when they have just 1 payline activated in this video online slot game. However, those who like to play with the maximum can place a bet of €/£/$45 on each spin they take. With potentially big prizes on offer, Eycon’s 94.9% return to player (RTP) rate can be considered rather average, although the low volatility level more than makes up for it.

Eyecon have a reputation for creating and producing a number of simplistic, basic but effective slot games and this Fiddle Dee Dough slot game is just another prime example. Las Vegas Casino players should still look to play this slot game, though, as the ‘Free Spins’ game can help boost winnings in a nice way whilst those who like a classic vibe should be more than happy with what they encounter.