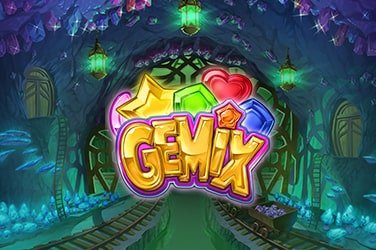 Gemix is a fantasy cluster pays video slot from seasoned provider Play’n Go. In this grid slot from 2014, Play’n GO are clearly trying to do something new with the tried and tested slot game formula, with new worlds players can unlock while spinning the reels and unique symbols and Wilds in each world. If you play for long enough, it’ll feel more like three slots than one.

Gemix is a cluster pays slot game, which means instead of lining up symbols across the reels, players must collect clusters of symbols on a grid of slots. Clusters of five or more symbols pay, with the highest paying symbol in the game, the gold star, paying between 3.5x and 1000x the bet for between five and 15 symbols in a cluster. Orange flowers pay between 1x and 100x the bet for five to 15 symbols, while lower paid blue gems pay just 7.5x the bet for 15 clustered symbols. When winning combinations land in Gemix, those slot game’s winning symbols disappear and new ones fall into place, which means multiple wins can land from a single spin.

This is where Gemix video slot really excels. As players spin the reels, they’ll slowly land winning combinations which help to clear patterns and open up new worlds to play in, as well as unlocking World Bonus payouts. These new worlds look different and play differently, too; The game’s Wilds act slightly differently in each world, with some worlds offering spreading Wilds and sticky Wilds.

There’s also a Crystal Charge feature which slowly charges up with every cluster win players net. After 20 winning symbols, the Crystal Charge is activated and triggers one of four features which will warp, destroy or transform symbols on the reels. Win with 40 or more symbols before the Crystal Charge triggers and Super Charge the next game round, which means all wins will be multiplied 3x. This is a super little feature and really helps to keep every spin fun.

Gemix video slot offers an average RTP 94.78%, which is, unfortunately, a little below average for a slot game of this kind. The game’s RTP means that for every $/€/£100 players spend on the reels they may win back around $/€/£94.78 on average, though of course many players will hope to win back more than this. It’s also a medium variance slot game, so a good balance for most playing styles, with wins coming out fairly frequently.

While the game’s RTP is a little on the low side, players who think they might get a kick out of Gemix slot game’s unique gameplay should give this slot a try anyway. The worlds feature is nice; it gives a sense of progress the longer you play for, and means the slot doesn’t get boring because you’re never far from unlocking a new world. Gemix slot game’s Crystal Charge feature also helps to keep things interesting spin to spin, and while many of the cluster payouts are small, they happen often enough to keep Gemix fun.

Play more from our very best selection of slot games and get the thrill of the glitz like you were in a land based casino but in the comfort of your house. Play online, win at Las Vegas Casino.