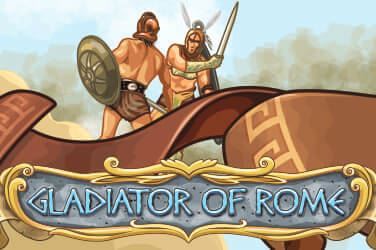 Few themes have had more coverage in the slots gaming world than that of Ancient Rome, but the ingenuity of modern games developers means that new angles can always be found. A classic example is Gladiator of Rome, one of a number of Roman-themed slots in the Las Vegas Casinos collection, produced by 1×2 Gaming, a reliable developer that has been around since 2003.

There is plenty to enjoy in the visuals for Gladiator of Rome slot game, which is depicted in a ‘cartoon’ style. In  Gladiator of Rome slot game the graphics are pleasing to look at and the soundtrack provides suitably stirring support to the gameplay action. The reels are drawn over a desert backdrop with a ruined Coliseum in the middle distance, and the five-reel, three-row format is clear and distinctive, set in a frame that looks as though it has been carved out of marble.

In Gladiator of Rome online slot the lower value symbols are the familiar card values of A, K, Q and J and these are supplemented by some appropriately Roman icons, including a golden eagle, a shield, horses, a sword, a gladiator and Caesar. The legendary Caesar is the most rewarding symbol in this slot game, paying x1000 coins if you can line up five of his symbols across the reels. The Wild function is taken by the gladiator symbol, which can replace all of the other icons apart from the bonus.

The Bonus symbol in Gladiator of Rome slot game is a depiction of two gladiators locked in combat. It appears only on the three central reels and it is the key to the game’s additional features. If the Bonus icon appears on all three of those reels in the same spin, it launches the Free Spins feature, which generates an impressive collection of 30 Free Spins to boost your winnings.

The opening ten Free Spins will be played at the usual x1 rate. But on the next 10 spins, that payout will be doubled, and for the last 10, the payout rate is x3. In addition, the Jack symbol, which is the lowest value icon in the game, is removed during the Bonus feature, increasing your chances of landing a significant prize while also making it easier to land combinations.

This is a no-nonsense type of slot game, with none of the fancy features that you often find in modern titles, but it provides a solid base game, rooted in a well-realised theme that provides a pleasing impact and helps to conjure something of the atmosphere of Ancient Rome.

The real strength of Gladiator of Rome slot, however, comes in the Free Spins bonus feature. The generous number of spins, combined with the multiplier element makes for a player-friendly payout system, and it is possible to pile up some significant wins during this phase of the slot game. Overall, this is a solid and reliable slot game that should have wide appeal.