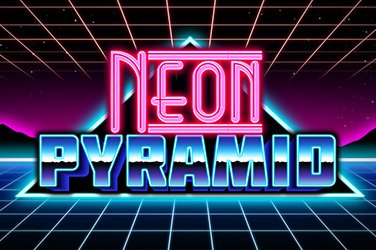 The Las Vegas Casino collection features a selection of the very best slots games in the modern industry, including several from one of the giants of the gaming sector, Inspired Gaming. The game provider spread their expertise over several sectors, including physical gaming machines and virtual sports, but they have also developed an exciting range of online slots, including Neon Pyramid, which takes the player back in time to an era when slots were simpler.

The presentation here is a retro-themed take on early 1980s video games, and it is certainly eye-catching. The playing grid of the Neon Pyramid slot game is presented against a futuristic-looking backdrop, made up of neon lines and a distant dark mountain range that has a strange purple glow behind it. It is reminiscent of a number of 1980s cultural icons, particularly the science fiction movie Tron, and the soundtrack provides a suitably minimalistic 1980s accompaniment.

The online slot game offers a relatively unusual 6-reel layout and avoids the traditional pay-line format for a multiple ways-to-win mechanic, which is always popular with players. Instead of lining up symbols from left to right, you simply have to bring together a cluster of three or more of each symbol in an adjacent pattern. The total winning ways of this video slot figure is 4,096, which will be appreciated by most slots players. The RTP figure of Neon Pyramid online casino game is a respectable 95.85% and the maximum win is x10,000.

As for the symbols themselves, you will find the familiar card suit values, which are supplemented by some distinctive 1980s-era icons. These include a DeLorean sports car, a cassette tape, sunglasses, and a synthesizer. The car is the most valuable symbol in the Neon Pyramid video slot and if you can combine six of them, you will be in line for an impressive x200 pay-out.

The Inspired Gaming title comes into its own with its various bonus offerings. The first game feature to mention are the Reel Modifiers. These come into effect when the pyramid behind the reels activates at random, and turns the two central slot reels into Wild reels, as well as instigating a x3 multiplier. Also during the base game of Neon Pyramid slot, you may see Bonus symbols on the reels, which will animate and add double-height icons to the reels that are still spinning, boosting your winning chances.

Land three Bonus symbols and you will launch the Pyramid Feature. This is an entertaining and innovative twist that sees you progress up the levels of the game’s Pyramid, and your eventual finish point will determine how many Free Spins you get to play with and what the level of the game multiplier for those Free Spins will be. At the top level, you will earn a x10 multiplier, and have one or two reels completely Wild during the Free Spin round, which can deliver some solid payouts.

Slot games with a 1980s theme are relatively common, but this is one of the most impressive takes on this style of video slot that we have seen. It offers a slick presentational style, plus a solid base game and the array of bonuses help to lift it to the next level.

The best selection of online casino slots and table games are here at Las Vegas Casino. Enjoy a Vegas Strip atmosphere and spin to win with Neon Pyramid slot game.