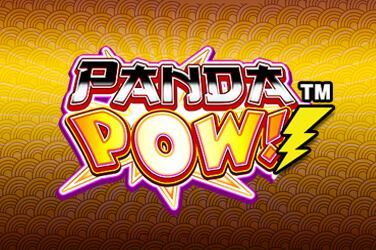 Panda Pow is a cute online slot from Lightning Box, first released in 2017, which has a Chinese theme and plenty of adorable pandas adorning the reels. Players spin the reels to an accompaniment of traditional Chinese music in the hopes of lining up matching symbols in this 25 payline slot.

Panda Pow plays on 25 paylines with players lining up matching symbols to win. The game’s highest paying symbol is the panda eating bamboo, who pays out between 2x and 500x the bet for between one and five symbols on a payline. The goldfish, coins, lanterns and fan symbols payout up to 200x or 100x for five symbols on a payline, and there are also two other ‘Kung Fu’ style panda symbols which serve as both the game’s wilds and one as a scatter.

During free spins, stacked wild gold pandas will be added to reels two, three, four and five to increase players’ chances of winning and boost big wins. These gold panda wilds are only found in the Free Spins mode and are the key to unlocking some of the biggest wins that Panda Pow has to offer.

Players who like to spin the game’s reels on mobile devices such as tablets and smartphones will be happy to hear that Panda Pow runs smoothly on both iOS and Android devices, making it a great slot to play while out and about. The slot game’s graphics look beautiful on any device and animations are always smooth and nicely rendered no matter where you play.

Panda Pow game offers an average RTP of 95.51%, which is a little on the low side compared to other online slots of this type. This means that for every $/€/£100 players spend on the reels, they can expect to win back about $/€/£95.51 playing Panda Pow. It’s alright, but the RTP alone won’t attract any new players. It’s a low-medium variance game, which means wins come in fairly frequently, though.

Panda Pow online slot is a gorgeous slot which does something a little different with the popular Chinese slot theme while capitalising on the success of the Kung-Fu Panda film franchise. The game’s Free Spins mode is fun and the stacked Wilds certainly have a lot to offer. That being said, Panda Pow game doesn’t break any new ground, and Free Spins features aren’t hard to come by in slots these days. If you like the slot’s graphics, we’d recommend you give it a try.