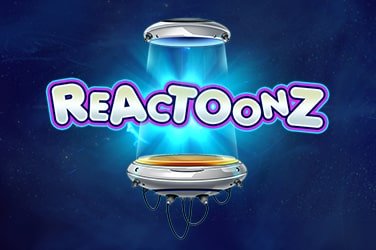 Brace yourself for an alien invasion. Reactoonz is a 3D slot from Play’n Go which lets players defend the earth from invaders and win real money along the way. We’ll be putting this video slot to the test and assessing everything in our full Reactoonz slot review.

The game follows a quite rarely seen 7×7 format with cluster pays. For those that aren’t familiar, cluster pays mean that the slot doesn’t follow traditional pay lines and instead pays out based on groups of similar symbols. The general rule is that the game’s symbols need to be touching each other in a cluster anywhere on the grid in order to score a win.

In terms of symbols, Reactoonz video slot players will find a squad of friendly aliens on the reels. The two-eyed aliens are the highest paying symbols, while the one-eyed aliens are the lower-paying symbols. It’s also important to know that Reactoonz uses cascading reels with symbols dropping down the grid to form winning combos. To put it simply, once a win has been scored other random symbols will be dropped in to fill the empty spaces.

This Play’n Go slot has a return to player (RTP) value of 96.51% which is about average for an online video slot game. This being said the game also is highly volatile, which means there is quite a stark difference between the minimum and maximum win amount. With this in mind, it’s fair to say Reactoonz would suit a more confident slot games player who can handle their bankroll well. Don’t forget Reactoonz slot game has a maximum payout of 4,570 times the original stake which represents a nice reason to give it a try right here at LasVegasCasino.

When it comes to bonus features of the game, Reactoonz doesn’t disappoint. Each win that a player scores will contribute towards the Quantum Leap charge meter. The slot game’s meter has five levels and with each win one of the random features will be added to the queue at random. This includes:

Once the game’s charge meter is full, the fifth and final Gargantoon feature will be triggered. This is where a 3×3 wild will appear randomly on the grid to help players score more wins – a hugely valuable bonus.

Reactoonz video slot is developed by Play’n Go which is an industry-leading software provider. The developer is constantly releasing new slots and Reactoonz is just another of their up-to-the-minute 3D slots games. Play’n Go is also fully regulated in dozens of jurisdictions and licensed by the Malta Gaming Authority and UK Gambling Commission, to name just two authorities.

Reactoonz video slot game is a pretty intense game. The gameplay is unique and wonderfully adventurous with plenty of bonus features to keep even the most experienced slots players entertained. This also means the game is highly volatile, which paired with the complicated gameplay may not appeal to newer players. If you’re looking for a slots adventure, Reactoonz is the right online slot game for you.

Reactoonz is one of the most popular slot games around the world and we assure you a top selection of the best video slots from the best game providers here on Las Vegas Casino.