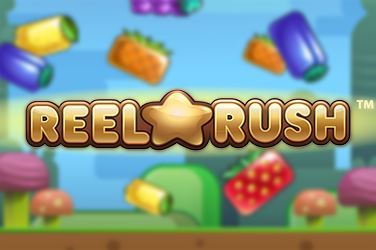 Added to the ever-growing list of online slot games back in 2013, Reel Rush video slot by NetEnt has a very chirpy 1990s theme and has the feel of a Candy Crush or Super Mario Bros game with similar graphics and animations. Nonetheless, this particular slot game is one of the better ones that NetEnt have released in recent years and offers enough for gamblers of all types.

This slot game offers the punter over 3,000 ways to win, and the maximum payout comes in at an impressive 480,000 coins. Another good feature of Reel Rush online slot game is the ability to win a payout on level one, which is not something that the majority of similar slot games typically offer.

If you manage to get three identical symbols on adjacent reels left to right, you will receive a 10-coin payout. Reel Rush slot game comes with five reels and has a Return to Player stat of 96.96%, and the bet range is from $/€/£0.01 to $/€/£0.20 per spin. The max bet button will automatically spin the reels with the maximum wager of $/€/£100.

The gold star symbol containing the word “WILD” will substitute any other symbol on all reels bar one, giving you the opportunity to earn bigger payouts.

The base game of Reel Rush slot offers as many as 45 paylines. With each winning line, the game will reward you with even more paylines which will give you many more chances to win, thanks to the respin feature which is triggered after each win.

If you are lucky enough to win five times in a row, then you will find the whole playing area suddenly opened up due to the addition of the free spins bonus feature. As an example, the first free re-spin will give you 135 ways in which to land a win, whilst the 3rd re-spin will reward you with 675 different ways to win, and the fifth re-spin will give you the chance to win an impressive 1875 ways.

If you manage to consecutively win five times, then the game will also reward you with eight free spins. Plus, you will find the whole board opened up giving you a massive total of 3,125 ways to win. It is here where you can expect to score some sizeable wins, so as you can imagine, this is not something that happens all that often. However, when it does you could be looking at some substantial payouts from this game.

Reel Rush is a medium volatility slot game that will give you the quick rush of small wins, whilst at the same time keeping you engrossed as you attempt to reveal the rest of the playing board in an attempt to generate some really big wins. The betting range is wide enough to keep both passing gamers and the more determined gambler contented, and the possibility of some huge wins will keep you playing this enthralling slot game for quite some time.

If you Reel Rush slot game is the way for you, check other titles from Las Vegas Casino excellent selection of slot games.