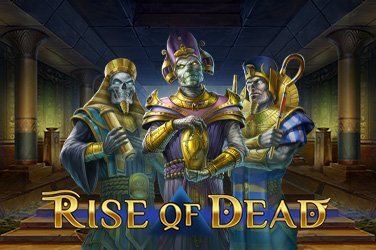 Created by the team at Play’N Go, Rise of Dead is a high variance video slot game. If you have played the Book of Dead slot, you will definitely be familiar with the gameplay here. It has five reels and 20 paylines and can provide wins of up to 5,000 times your stake. Rise of Dead comes with a respectable RTP rating of 96.53%.

As you can guess from the Rise of Dead slot game, there is a dark, Ancient-Egyptian theme to this game. The slot can be played on a mobile, desktop or tablet device and is enhanced by a compelling storyline and exceptionally strong graphics.

There are a large number of symbols in this game, including regular offerings such as 10, J, Q, K and A royals as well as three pharaohs, which have a higher value. The main symbol to look out for is the scarab beetle, which opens the door to impressive bonuses and features to win big time.

The least that can be staked on the Rise of Dead slot game is 20 cents, while the largest wager is 100 dollars per spin. 5,000 times the stake is the highest payout that can be won.

To activate a win, as with most machines, the player is looking for combinations of three icons or more. The more of the same icon in a combination, the bigger and better the wins will be. There are also a number of attractive bonus features which can provide bigger payouts in this Play’n Go video slot.

There are three main features to the Rise of Dead slot game. The first one is Mega Stacks. One symbol is selected at random in the regular game, filling up 12 spaces on a reel and delivering a better chance of winning if you get a combination of that individual symbol.

Gift of Gods is the second feature available. This is also launched randomly in the base game and sees reels 1, 3 and 5 filled with the same symbol, much like with Mega Stacks. This offers an even better chance of filling up all the reels with that symbol. Should you fill the reels with one of the higher paying symbols, you could win 500 times your stake.

The last bonus feature on offer is the Ancient Free Spins feature. If the reels get filled with three scatters on reels 1, 3 or 5, this feature is launched. You are initially given 10 free spins, but you can get 10 more if the scatter icon lands during those initial spins. There is no limit to the number of free spins you can get, so big wins can occur as a result.

If you like the Rise of Dead slot game, you are likely to enjoy this game too. With better graphics and stronger bonus features, it is hard to argue that this is not the better game. Although it is a high variance machine, if you are looking for an enjoyable game, this could be the one for you.