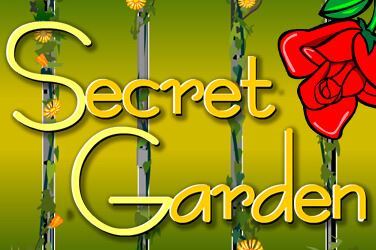 It’s not often that you find a truly unique game when you’re a slots aficionado, but the Secret Garden video slot might offer up a few surprises on your way to riches. While it’s not the best looking game you’ve ever seen, it’s got a unique theme that’s different from the usual Viking or Mummy themed slot games, as well as one super inventive mini game that’s worth a look on its own. It’s also got the potential to be a very high payer, so is this a journey into a magical world, or will you get stuck in the weeds? Let’s take a look.

Secret Garden is a video slot by developers Eyecon, who have an absolutely huge portfolio of games that covers just about every theme you can imagine. While there aren’t any blockbusters in their roster, there’s a good chance that you’ll have played an Eyecon game before just because of the sheer number available. This game is themed around gardens and gardening, a theme it wears on its sleeve.

All of the Secret Garden slot game’s symbols are garden-themed, including a wheelbarrow, a sun, a rabbit with a carrot, a fork and trowel, a watering can, a gardening boy and girl, a squirrel and a bunch of roses. The whole game area is overgrown with vines and plants, while flowers festoon the buttons. None of this is very high definition, and it’s not great looking in comparison to other modern slot games, but you won’t care when you find out about the potential prizes.

All of the slot’s symbols payout, and even the smaller ones pay out as much as three and five times your stake. The top paying sun symbol grabs you a truly massive 38 times your stake. That’s nothing compared with Secret Garden slot game’s padlock wild though, which pays out 380 times your stake. The wild also trebles any other wins when it lands on the same line, so it’s a symbol you’ll be on the lookout for. As you’re on a 5 reel, 25 payline slot game, these wins can come fairly often and you won’t find it difficult to make some cash. Secret Garden slot game’s RTP confirms this, working out at a respectable 95.81%

While the main game is interesting, the bonus rounds are where the real action lies. One of these is a basic free spins game triggered by landing three to five gate scatters, with the maximum granting 50 free spins, where all the wins are subject to a 2x multiplier. A second bonus round of Secret Garden slot game is a bit different, and is accessed by landing three overgrown key scatters on the reels. This opens a mini game in which you control a little gardener with your mouse, trapped inside a maze.

Using your watering can you must make flowers grow in the maze, revealing bonuses in the form of roses worth cash, more water for your can and the key to the next garden. You can keep progressing every time you find a key during Secret Garden slot game playing, and the game only ends when no more keys are found.

Overall, Secret Garden is a great slot game if you like slots with a fun theme. Find more of the best online slot games selection tested and reviewed by Las Vegas Casino.