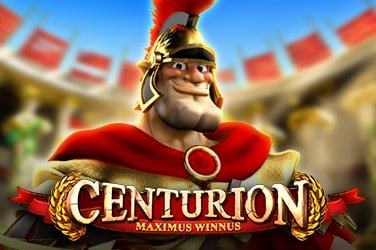 Centurion is a 5-reel, 20 payline, Ancient Roman-themed slot game from Inspired Gaming. The game’s betting range is from $/€/£0.20 to $/€/£250, so it is suitable for both low and high rollers. Released in 2015, the video slot transports players back in time to the arena of the Colosseum, where Gladiators fought bravely under their Roman oppressors. The top prize of the Centurion slot in normal play is 500x your stake, and the RTP for this video slot is a conservative 95%.

Centurion may appear a fraction outdated, but the game’s graphics still hold up well. It has an epic, imperious sounding soundtrack blasting out fanfare phrases on each spin

Centurion slot game’s 5-reels carry the symbols one would expect from a Roman, Gladiator game. Set against the backdrop of the Colosseum, the symbols include a Centurion Charioteer, an image of the Colosseum, crossed swords over a shield, Roman coins, Roman helmets, and Js, Qs, and Ks. The latter card symbols are the low payers of Centurion slot game. Land 5 across all reels from left to right and you win 200 coins.

The Wild symbol of the Centurion slot game is the Laurel Wreath, and as per usual, it substitutes for all other symbols. In addition, there is the Centurion bonus figure and the Centurion Maximus Winnus Logo.

This slot has 4 mini-bonus games to unleash. They are triggered by landing the Centurion bonus figure. Land 3 or more and you will be shown a Bonus Wheel. It is from this wheel that you select one of the Centurion slot bonus games. The games consist of:

Centurion online slot is packed with bonus features, the last of which is the reel modifier’s game. Key an eye open for a Centurion who will appear on a completely random basis to blow his horn. It announces the start of one of 4 mini bonuses.

The creators of this online slot game, Inspired Gaming, are part of the Inspired Essential Entertainment Group, which operates in 35 jurisdictions across the world. They have supplied more than 50,000 gaming systems and terminals for gaming machines in bars, pubs and casinos, and many online slot games to more than 100 websites. Microgaming signed a deal with them in April 2020 to secure distribution rights to a selection of their slots on their worldwide network of online casino platforms.

Centurion is an exciting, medium volatility slot game that can captivate you for hours. You can play it at a UK online casino on a desktop or a mobile device through your browser or via an Android or iOS app. Centurion slot game is not as simple as some other online slots, so may not suit newbies.

The most popular online casino games are available at Las Vegas Casino. Our pursuit to provide you the best experience is a never ending project to find in our slot games page. Let us know your evaluation of the Centurion slot game.